Today we’re going to share our most memorable diabetes day. You can take this anywhere…. your or your loved one’s diagnosis, a bad low, a bad high, a big success, any day that you’d like to share. (Thanks to Jasmine of Silver-Lined for this topic suggestion.)

Most memorable diabetes day: The first day I met another type 1 diabetic.

Thirteen is an awkward age, puberty makes it uncomfortable and scary. Being diagnosed with a disease you’ve never heard of makes it even more uncomfortable and scary. My natural instinct was to be embarrassed about it all and to hide it from everyone I knew. This carried on for about 6 months until my parents forced me to go to a camp for kids with type 1 diabetes, Texas Lions Camp. I cried and tried to think of everything I could to get out of it, but my parents were adamant.  The day they dropped me off was the first time I met another Type 1 diabetic.  As strange as it sounds now, it was the first time I ever realized that type 1 diabetics could be normal kids too. My perspective on the disease changed and my perspective on my life and future changed too. I felt a sense of universality and could relate to the other kids in more ways than I could to any of my other friends. I spent the rest of that week at camp learning about how other kids dealt with their diabetes and how it didn’t have to be so life consuming. I was shocked and oh so relieved. That first week at Texas Lions Camp made me realize that diabetes is something that makes you a stronger person, not a weaker one. I am forever grateful for my forceful parents because they knew exactly what I needed. I attribute so much of my success today to that camp and how it made me feel so incredibly calm and included. I returned the following years as a teenager and now attend as a medical team member and help others boys and girls transform as I did. It continues to amaze me that just one week each year gives me the strength to deal with my diabetes every day. So thank you Texas Lions Camp for being so instrumental in helping me become who I am today.

It was as regular day.  I picked Hannah up after school to take her to our family doctor.  I thought she had a UTI.  She had been drinking a lot and seemed thirsty all the time.  By the time we saw the doctor is was around 4:00 pm.  After hearing about her symptoms, urine and blood samples were taken.  We waited awhile, then the doctor rushed in and said he had set up an appointment with an endocrinologist and we were to leave immediately to go see him.  We arrived at the endocrinologists a few minutes before closing time and were ushered into an exam room.  A nurse walked in and started taking out a syringe telling Hannah she was going to have to learn to give herself shots.  It finally began sinking in that Hannah might have Type 1 Diabetes, although at that time I didn’t even know it was called Type 1.  I remember asking the nurse, who was in a real hurry to go home, if Hannah had diabetes.  She didn’t realize that we had no idea.  She slowed down a bit but tried to explain carb counting and insulin in a matter of minutes.  She gave Hannah her first shot and said that Hannah would need to test her blood sugar and give herself a shot when she ate dinner that evening.  She gave us a lot of supplies, some pamphlets about diabetes, and a video about how to fill a syringe and give a shot.  We didn’t realize until later that night that the video was in Spanish.  We had an appointment to go back the next day and were sent on our way.  We were in shock.  I remember driving home in a stupor with Hannah just sitting there staring off in space.  When we got home we started reading and trying to figure out what we needed to do.  When it was time for Hannah to give herself her shot for dinner it took about 45 minutes.  I couldn’t watch and ended up in another room while her dad tried to walk her through the process. We were all scared.  Hannah may have only been 13 but that night she grew up fast.  Life got a lot more serious for our carefree teenager. 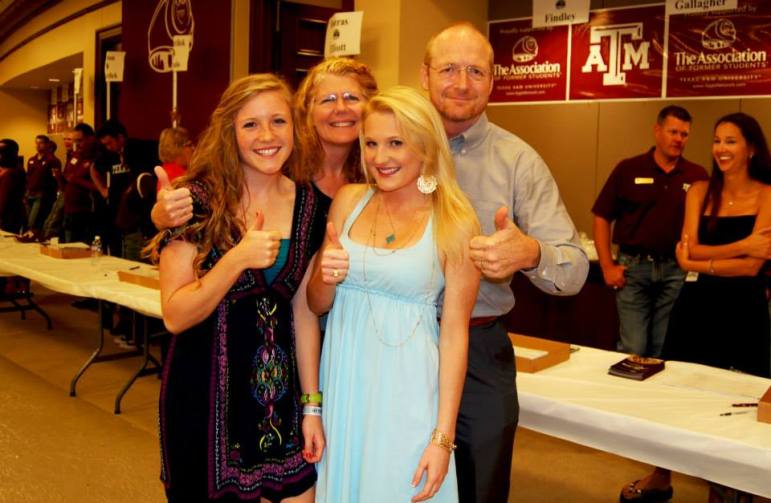